Find me on:
LinkedIn

VR Group has taken 1,300 Toughpad tablets into use. The Toughpad devices replace the drivers' paper timetables, work instructions and manuals.

"In practice, we no longer need paper in our work at all. We now have all the work-related material in electronic form. We start the shift with the Toughpad by signing in and receive the timetables and all the train-related information in the device. On the train, the tablet is in constant use", says train driver Erkki Kauranen.

Each engine has a docking station that keeps the Toughpad device available and in clear view as conveniently as possible - usually directly in front of the driver.

In addition to the timetables, the tablet shows possible delays, frost damages, electrical power supply failures and other temporary speed limits sent to the rail network by the Finnish Transport Agency. They are combined with the timetable data so the train driver is able to follow the running of his train against the timetable. 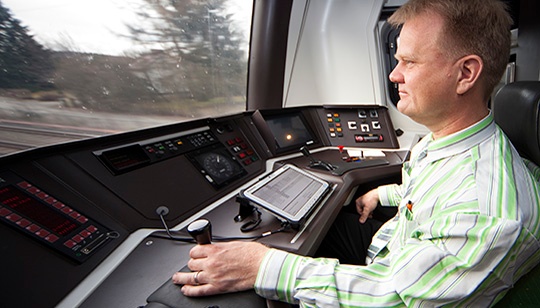 Work is guided by Kulkuri

"I check my upcoming shifts at home with the tablet so I'll know whether to pack the toothbrush for an overnight stay", says Erkki Kauranen.

Kauranen is also pleased about the fact that Toughpad FZ-G1 is a fully rugged Windows 8.1 device. "I can use it for the VR
intranet and with one swipe bring up again the timetable data which for drivers is the most important piece of information."

Thanks to the tablets' data link, network connection is available always and everywhere. "I like using the Internet during my rest periods, too. VR also allows limited entertainment use. We can load films on the Toughpad and watch them in the breaks."

The environment is already being saved as there is less printing taking place, and in the future the driver shall have a key role in the management of train energy consumption.

VR Group decided on Panasonic's Toughpad after a device review project that lasted a whole year. A large number of tablets were inspected and tested during the review.

The end-users and train drivers participated heavily in the decision-making. An assessment group compiled of the drivers tested the devices, and in addition devices were placed in the drivers' break room for anybody to try and evaluate.

VR Group chose the Toughpad because of its ruggedness, screen that can be viewed in challenging lighting environments and its Windows operating system, to mention some of the reasons. "The Toughpad is just the appropriate
device for our operational environment. The durability, life cycle and functionality of the device support the train driver
in his job."

"A 'tough man's device' is what is needed in these working conditions. We wait for trains on the platform in freezing weather after which the tablet has to be up and running in 30 seconds inside a warm engine. The qualities of the screen are crucial in our work. We sometimes drive towards direct sunlight and then through wilderness in a pitch-black night. The Toughpad screen is bright enough in sunshine and in night mode so dim that it does not interfere with the driver's vision", Kauranen commends.“how to” blog post should teach the reader how to do something by breaking it down into a series of steps.

When knowledge work is required regardless of place and time, Kauko innovates and creates seamlessly functioning digital solutions for top professionals, based on devices and software.

Kauko facilitates the work of healthcare professionals by providing equipment and service solutions.

Users of tools supplied for the trade and logistics sectors include, for example, warehouse employees, pilots and haulers.

Maintenance technicians, production managers and mechanics are examples of professionals for whom Kauko’s tools are essential.

IT solutions for functions that are critical to society must be, above all, reliable and durable.

Ask for a quote