Find me on:
LinkedIn

"The Toughpad is what we call an electronic flight bag or EFB," Finnair technical pilot Timo Seppälä explains. "The pilots' tablets contain things such as airport navigation charts, technical manuals - which would fill over 10,000 pages if printed - and various applications required by the pilots."

One of Finnair's key computer applications is performance calculation. The pilot uses it to ensure performance requirements are met and to calculate optimal engine power for take-off. Performance values vary according to aircraft
weight, runway, and airport conditions. 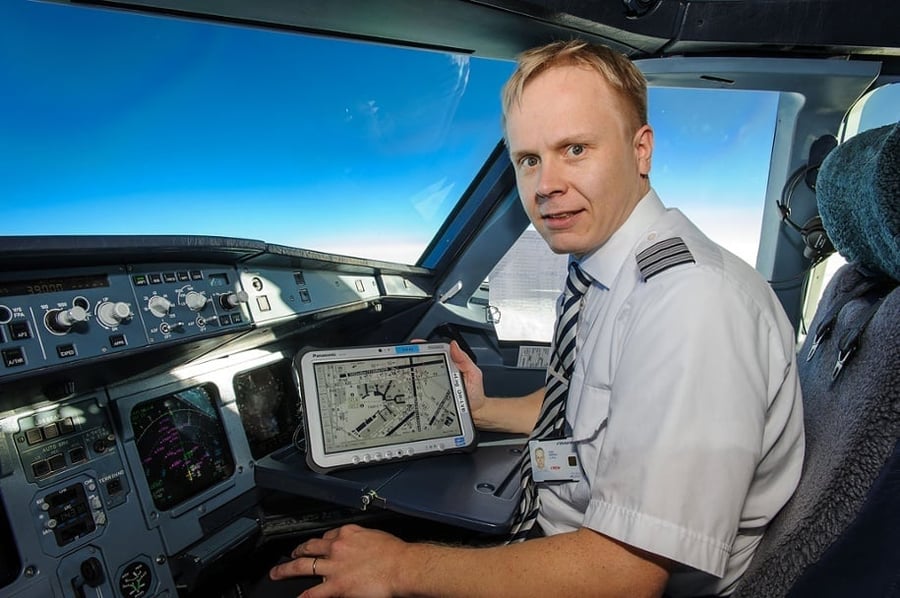 "This application is much easier on the engines. Some airlines use charts for performance checking, but the computer is much faster than a 'manual' check and thus also easier for the pilot," Seppälä says.

"Updating manuals online is easier than replacing papers. The Toughpad's LTE data connection also allows us to view and update the aircraft technical log, where all the maintenance procedures, checks, and fuelling operations are recorded."

The Toughpad for cabin crew contains e.g. manuals and service instructions. With the tablet, the cabin crew can also
report potential issues, for example a seat cover that requires cleaning.

"In the future, the data connection allows us to get passenger data and other flight-related information on the device," Seppälä says.

Toughpad best for the cockpit

Finnair has used computers in their cockpits since the 90s. As the previous generation of devices was reaching the end
of its lifespan, the company began looking into new products. "We initially looked into 20 different Windows 8 tablets, five of which were selected for further assessment. We had specific criteria, and a test group that included both pilots and cabin crew." According to Seppälä, the Panasonic Toughpad had several features setting it apart from the competition.

"One of the key distinguishing features was the display. Lighting conditions in the cockpit vary a lot. There could be
direct sunlight from the window, so a sufficiently bright display is required. On the other hand, during dark hours the
displays and instruments are dimmed to very low levels to allow maximum outside visibility."

Seppälä says that even on the lowest brightness settings, the displays on most tablets designed for home and office
are far too bright.

"The Toughpad has a very wide brightness range, and Panasonic also created a custom firmware for us, giving greater range in lower brightness settings. This allowed us to match the brightness of the displays of the Toughpaddeviceswith our other cockpit displays," Seppälä explains. "The Toughpad also has superior function key design. It has large, clear, and well positioned function keys in the front."

According to Seppälä, Finnair knows from years of experience that durability in important aircraft computers is worth investing in.

"The other tablets we considered were designed for office and business use. Cockpit use requires higher levels of usability and durability, and the rugged design of the Toughpad put it above the others."

Other advantages identified by the test group were the replaceable battery, user-friendly digitiser pen, and a design that gives a good grip.

Finnair's Timo Seppälä lauds the co-operation with Kaukomarkkinat and Panasonic during the project. "We had great co-operation. Kaukomarkkinat was an excellent representative for Panasonic, and helped us a great deal with the customisation we required. In addition to the display, the charging current of the devices was adjusted to our needs."

"From the outset, Kaukomarkkinat and Panasonic understood the special characteristics of our operation. They were well-informed on aviation requirements, since other airlines are also using Toughpad-tablets and Toughbooklaptops.
For example, Panasonic had already carried out many of the tests required by aviation authorities, which saved time for us."

According to Seppälä, tablets for pilots and cabin crew play a major role in daily operation, and their importance will grow in the future.

"The number of services available for these devices will increase. In-flight data connections will be possible in the future, which could allow e.g. updated weather radar images on the tablet," Seppälä says.

Finnair appreciates that the Toughpad tablets will have a longer lifespan than previous devices.

"Previous-generation devices had a physical lifespan of 3 to 4 years, after which they had to be replaced. Obviously devices also age in terms of features, capacity, and processing power, but we have estimated that the Toughpadtablets will have a five-year lifespan with us."

When knowledge work is required regardless of place and time, Kauko innovates and creates seamlessly functioning digital solutions for top professionals, based on devices and software.

Kauko facilitates the work of healthcare professionals by providing equipment and service solutions.

Users of tools supplied for the trade and logistics sectors include, for example, warehouse employees, pilots and haulers.

Maintenance technicians, production managers and mechanics are examples of professionals for whom Kauko’s tools are essential.

IT solutions for functions that are critical to society must be, above all, reliable and durable.

Ask for a quote